Long COVID (and your finances)

Lots have been said about the longer-term potential effects on health and we are nowhere near clever enough to have an opinion on that, however, there will be some long-term effects of COVID on our wealth too. Unfortunately, lots of studies have shown a strong correlation between wealth and health, so maybe it is a bit about health too?

The huge stimulus central governments around the world have initiated has led to interest rates that ‘could only go one way’ from the previous lows post Financial Crisis (FC). In the UK, the Base Rate is now 0.1%, a large fall from a whopping 0.5%. That effectively means nil return on cash. So, the decision is “do I want 0%, or do I risk some of it in the markets?”. For those with a short investment timescale (say under 5 years) cash might be OK, those with a longer timescale might well be forced into taking some risks (of getting below 0% – i.e. making a loss).

Our view is that interest rates will stay low for a long time, the UK government has over £2 trillion of debt, and any hope of repaying that is all but expired now. The best they can do is service it (by meeting the interest due), they certainly have a vested interest in keeping rates low. If I owed that much money and could set my own interest rate on what it cost me, I would be in no hurry to pay more!

The only high-interest rates that cannot be easily avoided are the punitive ones successive governments have imposed on our children and grandchildren for their student loans. Let us hope one day someone does something about this and helps the future generations out of this massive debt trap they are drowning in – after all, we will all likely be reliant on them one day.

The same huge stimulus will affect inflation. Lots of very clever people (and some of us less clever) assumed that printing all this money would have caused inflation last time around (FC), because it did in the most famous example in Germany between WWI and WWII. All the emotive pictures of Germans queuing up to buy bread with a wheelbarrow full of Marks led us to think we would be looking at the same again. However, the way money is ‘printed’ is different these days – of course,it is not printed at all. So, we are better looking at what they call the velocity of money, in other words how quickly it moves through the economy. And basically, it hasn’t changed, these vast amounts of (not) cash are simply sat around in other large financial institutions instead. Not causing inflation.

Our view is that inflation is likely to remain low as demand will not massively increase. However, this is a tougher call – again, if I owed a large sum of money would I like a big lump of inflation to come along and devalue it? To put it into perspective, two trillion is £2,000,000,000,000, so annual inflation of 10% (to make the maths easy!) would make the ‘real’ value of the debt (the real value is the value after inflation) 10% lower, so a reduction of £200,000,000,000 the same effect as paying off two hundred billion, whereas 1% inflation is effectively reducing the debt by only twenty billion in ‘real terms’. These numbers are BIG… if you can’t comprehend how big see our blog on millions, billions and trillions – scary!

This one is of course tougher to call, although we do of course all know that markets can go down as well as up. I would love to leave it there, as at this point, I am right. However, we all knew that, and it offers little value. So out on a limb, we go – whilst not giving any advice of course. Shares are valued at what the last person paid for them, if more people want them, they go up, if more people sell them, they go down. Overall, I think the earlier two points mean that more will be forced into ‘wanting them’ and maybe end up sitting outside of their previous comfort zone. More people will attempt self-investing – following trends and then panic when things swing around. This will increase the volatility in the markets – at least the short-term volatility. Our role as professional advisers, it appears, will look even more like that of Odysseus navigating the Sirens, we will (metaphorically) strap ourselves to the masts of our clients’ ships and ignore the fake but enticing noise of those looking to distract us and drag us onto the rocks and ruin, hopefully guiding everyone to calmer waters and on to their desired destinations. The next decade for investors is unlikely to be anything other than even more turbulent and it’s imperative none of us lose sight of what the long-term goals are. Then to be invested appropriately in assets that are diversified and constantly monitored and as our cricket nut partner Giles would say, lovingly nudged and nurdled along with the grace of a Test Match innings, not thrashed away at and wildly knocked around like the sex and violence of a Twenty20.

For many, the impact of COVID has been extremely unnerving on their jobs. Unless you are in those few sectors that have benefitted (for example Big Tech, Food Delivery, Supermarkets) it is unlikely you feel more confident about your position today than you did a year ago. This means a lot of soul searching and anxiety when contemplating big-ticket purchases (likely leading to less inflation as mentioned before) but in a more positive way maybe reflecting on financial decisions (or lack of) and building better plans to get to the point of financial stability, by diverting the savings made (by sadly not having any fun on holiday or down the pub), along with the likely reductions in future mortgage interest payments into plans to build a more dependable future for your family. Record amounts have been paid off by UK households’ debts this year, something that will help the budgets of the future. There are also huge variations between those able to work from home and those unable to, in how employers are behaving with furlough, and between the difference in the on support offered to the employed and self-employed people.

It maybe is time to sit and reflect what we call the ‘Hierarchy of Financial Needs’ – our version of the famous Abraham Maslow theory. 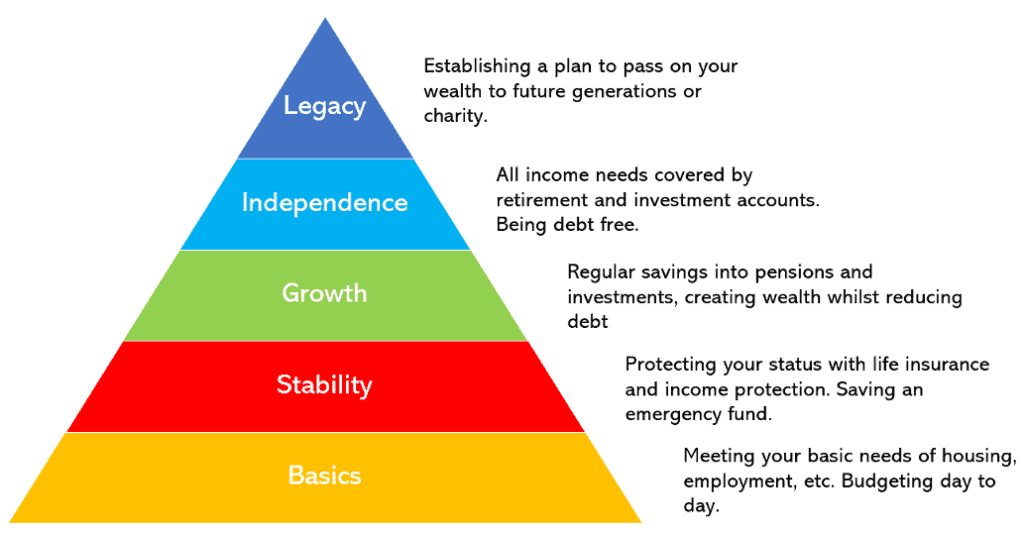 If we can be of any help please email us at hello@ssfs.co.uk